New Year's Eve. The filament is emitting light with energy of 80 watt in incandescent bulb made by a soda glass. Illuminating the world through the bulb. The world means a small room with kitchenette for a man without desire. A man without desire sits on the bed and eats delivery Chinese noodles. In the room he just brews his coffee. The water boiling kettle evaporates the reverie of the man. Steam go through a ventilation fan and become rain clouds. On the filament, the reverie of the man without desire taps the roof of his apartment. It is monotonous rain without melody.

The steam wander about the other side of Frō River. Putting the martini on the bar counter of the river side diner seems to be waiting for a lover for hours. Several olive sticks surround the coaster that have been wet with the dew condensation of cocktail glasses. At midnight, the steam become a small water droplet and fall asleep under the bridge of the dry river. In dining hall, people are talking cheerfully, joking and laughing. In the kitchen, the waiter repeats the order loudly and the dishes gather. A water droplet hears the bustle of hilarious. Frō River runs into the soil at the end of December. And the surface of waterway is dried up until the beginning of the next year. The river is called fled water. He sleeps in the darkness till dawn. In the water which cook a poached egg below the horizon.

Through the sunshine, the steam return to the apartment as high humidity. The filament keeps the light in the room, but as tungsten reaches its boiling point the inside of the globe is fogged. Was the filament a light of a man without desire? No, as long as a lifetime of 1000 hours eventually comes, it will be changed with others. There is no hope or despair in the vacuum of an incandescent bulb. Frō River flows in New Year's Day.


Quotation:
*'Musashino no mukashi' Kunio Yanagita.
In English "The past of Musashino". Translation by suzuki.
Notes:
*1. Kunio Yanagita is a scholar of Japanese native folkloristics.
He traveled throughout Japan, collected folktales. And his accumulation of folklore is excellent in geological analysis. He is also known as a poet.
Details about Yanagita are here. https://en.wikipedia.org/wiki/Kunio_Yanagita
*2. Frō River is a small river which flows in Saitama Prefecture near Tokyo.
The name of Frō in Japanese stands for Never-Aging. In Musashino area including the suburb of Tokyo, there are legendary lands where the soil absorbs rainwater and keeps drying up. According to folklore, it is said the people will be never-aging who spent the night under the bridge of the dry Frō River. 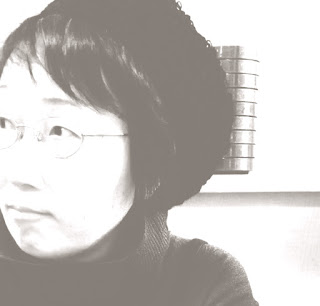 hiromi suzuki is a poet and artist living in Tokyo. She is a member of “gui” (run by members of the “VOU” group of poets, founded by the late Katsue Kitasono), and the author of Ms. cried, 77 poems by hiromi suzuki (kisaragi publishing, 2013), and logbook (Hesterglock Press, 2018).
Her works are published internationally in Otoliths, BlazeVOX, Empty Mirror, TAPE HISS zine, The Arsonist, Coldfront, 3:AM Magazine, NationalPoetryMonth.ca 2015 / 2017, amongst other places.
More work can be found at hiromisuzukimicrojournal.tumblr.com.