My heart is a town so small it doesn’t have a doctor or a cop or a priest, doesn’t even have anyone on standby to plow the roads in winter or fill in the potholes in spring, and maybe that’s why people say all those teeth-rattling, bone-jarring things about me, but you ignore what people say and undo your buttons and unpin your hair, and then it’s like daylight at night, the light streaming in on a soft slant, poking at the black seeds in the corners and the weeds in the flowerboxes, stirring the town back to stunned life.

Gregory Corso was sitting in the window of Allen Ginsberg's East Village apartment – two, three hours, just sitting in silence. He had vowed to himself not to be a willing participant to any further chaos. Just to be every day, it took everything. You could be having a really nice time at the beach or the park one minute and in the next minute there could be cops with meaty red faces gassing and clubbing you. Once at a reading some lady asked him, “What’s an id?” and he thought a bit before answering, “Eighteenth-century sea captains carousing in Surinam.”

A lot of people around here have no idea this sort of stuff goes on. They haven’t heard about Syria. They say, “Where is Syria?” Some think it’s Siberia. Several pieces of evidence show it must be Van Gogh’s suicide gun. Night stretches on for days. There are guys with their dicks out. I wouldn’t be totally surprised if sometime soon all packaged items come labeled: “Do not insert in rectum or vagina using fingers or mechanical device.” Only the little birds out back seem to know what’s what, darting, gliding, fluttering, then sharing battered space on a leafless branch.

History is the memory of what never happened. Certainly stop in and bring an energy bar and a yarmulke if you got one and want to accumulate a variety of religious experiences. The Pilgrim fathers may be off somewhere searching for street cred.  It’s the women, anyway, who do the real work, continuously passing back and forth through a door in the forest. The beavers beat a warning when the water is rising or when the men return from time to time with their darkness and their grievances. There are gods but with faces shaped a lot like our own.

The doctors say anger can give you a heart attack or stroke, and anxiety can give you cancer. I’m often angry, and when I’m not angry, I’m often anxious. Rivers of darkness are expanding and spilling, and a mass shooter has tweeted, “If you see me, weep.” Dazed mothers wander through a bombed-out city with their dead children draped over their arms. This could be just one more sign that the end is about to begin. While we wait, some demand proof, some wear hazmat suits, some only sigh. I’ve painted my beard blue and stuck gold stars on it.

I’m not really into cosmic things, but I don’t have a choice. Salvador Dali is forever. I used to see seagulls everywhere. Then a mirror unrolled from the sky, and the seagulls were just skeletons. None of it made a lot of sense. Someone said to me, “It’s simple. A black hole is where time and space disappear.” Simple?! Solid objects are melting into air at an alarming pace. It’s not an unknown future. It’s almost here. I think it must be like a wasp nest in a barrack in a German concentration camp or 634 minutes inside a volcano. 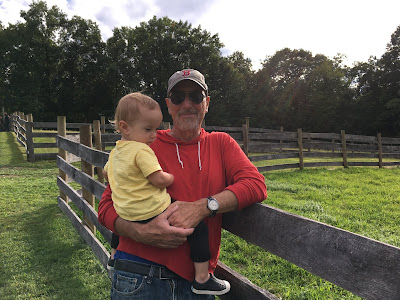 Howie Good is the author of The Titanic Sails at Dawn (Alien Buddha Press, 2019).