The art of writing #22 : Conyer Clayton

I've always been an avid reader, and have been writing poems and stories since I was a kid. My first publication was in grade 1, in my school's little journal called Perspectives, which is a hilariously awful name. Since I am talking about it, I'll share it. This is "My Mittens."


I love my mittens
They are warm
They are made of leather.
I put my thumb all by itself
And all my fingers together.

Wow, such inconsistent punctuation. Step it up 6 year old Connie! I feel like I had to have plagiarized some of that. I'm sorry if I did, to whoever actually may have written that! I've done a google search though, and found nothing, so who knows, maybe I really did write it.

I wrote a lot of short stories, flash fiction, and prose poetry in high school. In university and the years after, I stuck mainly to verse, but my current projects are now focused back on prose poems. I am beginning to dabble in flash fiction again too. It is funny how things circle back like that.

With silence. With time to be in that silence and see what images bubble up. To see what remains after noise fades.

I struggle often with auditory sensory overload, so letting myself be in quiet for extended periods is a crucial part of maintaining my mental health. In silence I can recognize where I am.

How did publishing your first chapbook change your writing?

I don't think it changed my writing, but rather how I think about publishing. My first chapbook, The Marshes, was self-published in 2017. It is a collection of 30 super tiny poems that felt somewhat cohesive. I began trying to see threads between my other poems, whereas before that I had just written with very little thought towards compilation.

A few of the poems in The Marshes were published as a micro-chap called Spider in a White Suit with Pearl Pirie's phafours press. Working with her on that was really fun! The DIY feel of it made me realize that I could publish the rest of these works myself if I wanted. You don't really need to wait on anyone if you want to put your work out there. I still bear this in mind when putting manuscripts together. Do I want to try for publication with a press, or just do it myself? I think there are benefits to both, and I am glad I have some self-publishing experience.

My first full chapbook published with a small press was For the Birds. For the Humans. with battleaxe press in early 2018. It is a (very loose and messed with) crown of sonnets that I had written way back in 2012 as a part of my Master's Creative Writing thesis. It changed how I thought about publishing because it was my first time working with an editor in any real detail with a bigger publication goal in mind. You couldn't ask for a better editor than Natalie Hanna. She is compassionate and intelligent and simply brilliant. She kind of set the bar for what I want in an editor, and that is a damn high bar!

Your first full-length collection is coming out in the spring. How are you finding the process of learning how to put together a manuscript? What have the challenges been?

Yes! And I am so excited! Putting together this manuscript has been a very lengthy process. Quite a few of the poems in my forthcoming book are from 2009-2012, and I've had them compiled in a sort of semi-collection since 2013, just sitting on my computer.

I took a hiatus from working on my writing in a professional way from 2013-2016 for personal reasons. When I started at it again in late 2016, I decided to try and get this collection out there, and if no one picked it up after a year or so, I'd self-publish it and  move forward to focus on other writing projects. Luckily, it got picked up by Guernica Editions fairly quickly for their First Poets Series.

Honestly though, once it was signed to them and the initial glow wore off, I was conflicted. I felt like, oh god, these poems do not reflect who I am now, what I believe in, or what I am currently writing. They are so old, I want this to feel fresh, etc. I talked to my amazing editor, Elana Wolff, about my concerns, and she totally got it. We gave the book a huge overhaul. The old poems were re-worked, the whole thing was re-ordered, the collection got its title, We Shed Our Skin Like Dynamite, and we found quite a few new poems I wrote in 2016-2017 that worked perfectly in the collection. And now I love it again! I am so excited to share it with the world.

I learned that you are allowed to edit old work to make it fresh, something I had not previously allowed myself. I also learned, from Elana, how to make a long collection of poems feel cohesive. She is so masterful in finding the little threads and hints and hinges between the poems, and that is something I hope to carry with me as I compile future collections.

My full-time job is as a competitive gymnastics coach, and so I have a pretty random schedule with lots of weekends and travelling throughout the year. What that means for my writing is that I squeeze it in where I can. I usually have mornings to myself, and do most of my editing, submitting, and organizing during that time. My writing itself happens when it wants to. I am not someone who sits and forces myself to write on a regular schedule. It happens when it happens, and I am lucky in that it happens pretty often.

I love Canthius! Maybe I am not allowed to say that as a review writer for them, but my love for the journal is why I agreed to write reviews for them. They are a beautiful and important magazine run by incredible people. I am honoured to be associated with them.

I also really like The Capilano Review, Parentheses Journal, ROOM Magazine, The Minola Review, and Vallum Magazine. They all have poems or essays in certain issues I find myself returning to.

I've read Sanna Wani's chapbook with Penrose Press multiple times. It is an object of incredible beauty, both visually and in content. It makes me feel good to read. It radiates kindness.

I recently read Sam Cheuk's chapbook with Baseline Press, Deus et Machina. It has such a unique and consistent voice. Certain lines made me stop and write them down in my own notebook so I could come back to meditate on them.

I have re-read Anjali Sachdeva's book of short stories, All the Names They Used for God, several times. I have not seen it get much attention, and I think that is wrong! It is so weird and visceral and makes my heart race.

Marlon James's Black Leopard Red Wolf is so incredible. I appreciate everything he is doing to propel the fantasy and speculative genre forward, to make a new genre, and to blow giant (and much needed) holes into that world. Also, he was interviewed on CBC a while back, and they asked him what music he listened to while he wrote, so he played a song by the band Earth, a drone metal band, which I really like. It was pretty hilarious and awesome to hear that play on CBC Radio. I don't really know why I am talking about this in such detail, but it obviously stuck with me. I think it is neat when you realize that an artist you are a huge fan of has similar musical tastes to you, or listens to similar music while they write. When you realize someone you kind of idolize is also a human who listens to drone metal. What I am saying is, I think he is really cool. 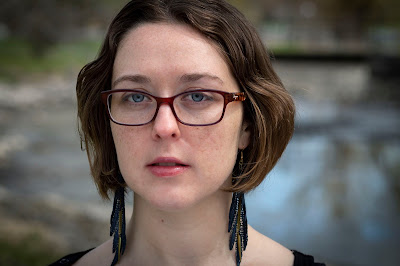 Conyer Clayton is an Ottawa based artist who aims to live with compassion, gratitude, and awe. Her most recent chapbooks are Trust Only the Beasts in the Water (above/ground press, 2019), / (post ghost press, 2019), Undergrowth (bird, buried press, 2018) and Mitosis (In/Words Magazine and Press, 2018). She released a collaborative album with Nathanael Larochette, If the river stood still, in August 2018. She won Arc's 2017 Diana Brebner Prize, performs sound poetry with Quatuor Gualuor, and writes reviews for Canthius. Her debut full length collection of poetry, We Shed Our Skin Like Dynamite, is forthcoming Spring 2020 with Guernica Editions.

A selection of her poems were featured in the second issue.


Conyer Clayton The art of writing