The soaked crow beside the road
has lost his definition.
Jennifer Moxley, The Open Secret

All of his stories began with a death. To mark a change his characters must bear. The greatest things in films, Orson Welles proclaimed, are the beautiful accidents. Beautiful, what he also referred to as divine.
Welles had a mistress for over a decade before his third wife discovered. Is this also divine?

A loss can be a beginning. No, not a loss. Because he knows where she is.

This is not fiction. This is just an illusion on paper.

Her face would have sagged, the doctor informed him. The muscles on the right side of her face released as she slumped against the steering wheel and their car slowed to a stroll down the incline to rest in the ditch. The car knew where to go and it went. As if to complete a thought. The boys asleep, buckled safe in their booster seats.
Other drivers along the same stretch of highway called for paramedics and police, but neither were able to revive her. The boys woke to a confusion of strangers and hands. They asked for their mother.

There was that John Cusack movie where his character kept calling their own answering machine from payphones to speak to his late wife, a soldier in the American Armed Forces. After she’s killed overseas and he can’t figure out how to tell their two children.

American actress Mariska Hargitay at three years old, asleep alongside her two brothers in the backseat, in the car accident that killed their mother, Jayne Mansfield. Upon impact, Mansfield’s wig was released, and thrown from her head. It lay in the back, with her children.

Now, both boys sleep on either side of him, in their queen-sized bed. Unable to sleep alone since the accident, neither he nor they. I want my mother.

Who was it who claimed: there are no accidents. Is this not divine?

His sister minds the boys so he can retrieve their car, so as to assess the damage. The difficulty of leaving his boys, even with family. The car revealed more than enough damage to require insurance, which meant diving into her filing cabinet, to unearth the paperwork. Or is that kept in the glove box? At least her arrangements had long been in place. Her need to be organized, to his mind, beyond reason. He takes this as comfort, relief.
He might never drive this car again. The dealer understands, and offers a generous trade-in.

In even the most minor automobile accident, he knew, he was required to replace the car seats.

He knew because she had told him. Repeatedly.

His heart held a silence, impossibly large. Enough that it suffocated.

Some say every death has meaning. Others claim death is entropic, and therefore void of significance. Of larger context, or grand consequence. They say you can find a quote for any and every ambition, an archaeology of contradictory meanings and purpose. Some things, he knows, are meant to stay buried.

She knew: meaning existed in gestures. In memory. Jean-Luc Picard in Star Trek Generations (1994): Not in what we have left behind, but in how we have lived.

Even as this moment stands between the living, the breathing remains, he is withered. He disappears into silence. His own thoughts become mute. The house thick with relatives, friends, acquaintances. Surfaces littered with abandoned food plates, half-empty wine glasses. Plastic cups. Children hold to the basement, amassed by the big screen. Sunday clothes on a Thursday. The sun glistens. From within their intemperate house. The cold, hard eye of the storm.

A week passes. A month.

It is impossible to be ever fully present or metaphysical in response to death. Both overwhelm, and each requires to keep the heart from becoming lost. If the heart has, or is, tether.

He wonders: what does it mean to be empty? A cardinal returns to the yard. He fills the squirrel busters with sunflower seeds. The boys assist with the hummingbird feeder, pouring prepared sugar water into the base. He screws on the top. The boys, together, place the feeder in the front of the house, on its hook. It sways in the breeze. 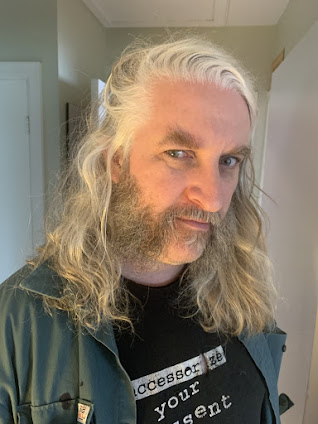 Born in Ottawa, Canada’s glorious capital city, rob mclennan currently lives in Ottawa, where he is home full-time with the two wee girls he shares with Christine McNair. The author of more than thirty trade books of poetry, fiction and non-fiction, he won the John Newlove Poetry Award in 2010, the Council for the Arts in Ottawa Mid-Career Award in 2014, and was longlisted for the CBC Poetry Prize in 2012 and 2017. In March, 2016, he was inducted into the VERSe Ottawa Hall of Honour. His most recent poetry titles include A halt, which is empty (Mansfield Press, 2019) and Life sentence, (Spuyten Duyvil, 2019), with a further poetry title, the book of smaller, forthcoming from University of Calgary Press. In spring 2020, he won ‘best pandemic beard’ from Coach House Books via Twitter, of which he is extremely proud (and mentions constantly). He spent the 2007-8 academic year in Edmonton as writer-in-residence at the University of Alberta.
flash fiction rob mclennan