I guess it was a long process. I was always interested in language, and began making various kinds of art involving language in my late teens, but I only really started writing and publishing more seriously quite a bit later, in my mid-30s. I think what resonates for me in poetry is actually the lack of fixed form, or the shifting nature of forms that emerge. As someone who is perpetually lost, someone who will forever be wondering what the hell they’re doing at any given moment, a closed form is no form at all. Not for me, anyway!

It’s a mysterious moment for me. Often just from moments and slippages everyday language, two or three words accidentally coming together, or, on rarer occasions, a whole sentence or verse. Sometimes it’s a feeling too, of course, or an impulsion. Sometimes it’s from the translating process as well (see the question on translation later on).

You’ve published poetry in numerous journals. Do you see your writing as a single, extended project, or a series of disconnected threads? Are you in the process yet of thinking about collecting any of your work into a manuscript?

To answer the first question, I would have to say that the answer depends on the day. I often see it as lots of disconnected threads, but then someone else will tell me how connected two or three quite different pieces seem, at least from their perspective. I guess it mostly feels like one big jumble of threads, some of which remain discreet, but with many others touching each other, in various configurations, and to varying degrees and intensities.

For the second question, I’ve published different sorts of artist’s books, zines, chapbooks and poetry collections in French and in English over the past ten years or so, several of which were written/created in collaboration, including, most recently a full-length collection in French (Le nom-membrane, Moult, 2019) and a chapbook in English (This Mud, A Word, Frog Hollow, 2019). I’m currently sort of working on two chapbook projects in English, and a full-length manuscript in French. I’m also hoping to start working on a full-length project in English sometime in the next couple of years. Hopefully!

I do what I can! I’m almost never able to work on a project for more than a few hours at a time, and usually not more than a few minutes at a time. Between translation contracts, domestic labour, and insomnia, my schedule is always different! This does seem to influence my choice of forms, which tend to be more fragmentary and non-linear, not that that’s particularly original, of course.

How does your translation work impact upon your own writing?

Quite a lot, really. I spend a good many of my waking hours translating, so sometimes a translation problem will spark a poem. I say a problem like it’s a bad thing, but it’s not. For me, it’s often the mistakes, slippages, and impossibilities that come up during the translation process are the most inspiring catalysts.

There are so many exciting small journals right now! talking about strawberries all the time, of course, haha. And Train, above/ground’s Guest, and Tripwire, and in French, Mœbius, Estuaire, and Watts. There are lots of others too, of course, that’s just what I’ve read in the past month or so!

Lately, I’ve been translating poems by Lisa Jarnot and Angela Carr into French, so I’ve been reading them quite a bit, especially from their recent books A Princess Magic Presto Spell, (Flood, 2019) and Without Ceremony (Book*hug, 2020). In French, I’ve been reading Laurence Gagné’s new collection, Les jardins de linge sale (Le lézard amoureux, 2020). Also been reading recent chapbooks and zines by friends and acquaintances, Olivia Tapiero, Andy Verboom, Conyer Clayton, and so many more! 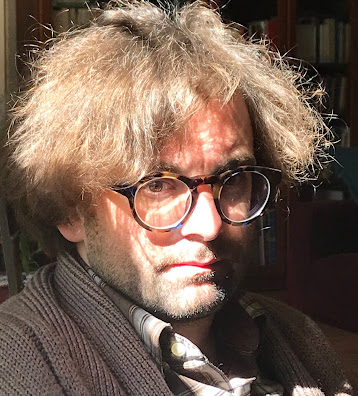 Simon Brown (1979) is a self-taught poet and translator from the traditional territory of the Peskotomuhkati Nation, in southwestern New Brunswick, now based in Wendat and Abenaki traditional territory, in the Québec City area. His texts have been presented in interdisciplinary artworks and collaborative performances, and via platforms such as Lemon Hound, Train, Estuaire, Vallum, Poetry Is Dead, filling Station, and the Fiddlehead. As a translator, he has adapted texts by Erin Robinsong, Maude Pilon, Angela Carr, Huguette Gaulin and Nicole Raziya Fong, among others. His collections and artist’s books have been published in Québec, Canada and France by Le laps, Vanloo, squint, and Moult. This Mud, A Word, was recently released in Frog Hollow Press’s New Brunswick chapbook series. simonbrown.ca

A selection of his poems appeared in the third issue.

Simon Brown The art of writing