Except for the Goosebumps series, which I devoured as a kid, I was not an avid reader when I was young, especially not of assigned texts (I might have to quit teaching if I ever have to teach Catcher in the Rye). The first book I fell in love with in high school was the first one I was ever compelled to finish, Virginia Woolf’s The Waves. It taught me that novels could exist almost entirely via atmosphere and form. That was the book that made me want to become a writer and I came to poetry by way of wanting to write fiction, which made sense, since the fiction I wanted to write would probably look like more like something written by Maggie Nelson than a narrative-driven saga.

I am drawn to poetry by the way it approximates musical composition and performance— the way irregular spacing can teach the eye and tongue to swing from allegretto to giocoso— a bolded word signifying fermata— how a poem can be at once erratic and structured— how rhythm can organically shiver down stanzas like spines.

I think it depends on the poem. Usually, I tend to write best when I am distracted by a lot of dissonant noise. Usually, my output matches the energy of my input— so if I flood myself with noise I am likely to write a more dissonant poem. If I do want to work through something that I want to be more conventionally musical and melodic, I will usually put on a movie or television soundtrack, often something by Thomas Newman, James Newton Howard, or Max Richter. At other times the poem begins less intentionally, rattling around in my head when I am doing other things. I suppose the one constant is the relationship to sound— as every poem I write begins adjacent to some sort of sonic feature, and each poem often begins itself as a sound or an image. I very rarely start with an idea, that usually develops in the aftermath of following sensory details.

You’ve published five poetry collections to date. Do you see your writing as a single, extened project, or a series of disconnected threads?

The idea of erasure, both as a practice and a concept, is woven throughout each book. every time you die (Alien Buddha Press) features erasures of my own work as well as T.S. Eliot’s The Waste Land and VOS (Yavanika Press) and At Root (Alien Buddha Press), are full-length erasures of Virginia Woolf’s A Voyage Out and Samuel Beckett’s, Waiting for Godot, respectively. The Oulipian constraint of having to create an original work from another’s text allows me to enter into critical analysis and theoretical discourse that also acts almost as a type of reader response mechanism that lays bare my personal resonances with the text. With Woolf, for example, my erasure uses original language and interpretive juxtapositions to expose concerns of nonhuman agency within Woolf’s first novel, a connection that has been previously discussed by critics such as Tim Morton and Derek Ryan in reference to Woolf’s later work.  I trace the same nonhuman lineage in my erasure of Waiting for Godot.

My interest in the nonhuman and conceptual and physical erasure extends to my book, not human enough for the census, which explores porous human and nonhuman boundaries, the marginalization and erasure of bodies that are too often forced outside of the category of the human by racist, ableist, cis, and heteronormative power structures, climate ignorance and the toll it takes on both human and nonhuman bodies and environments, and the ways in which the very category of the human all too often fails us. My forthcoming book, in which I take myself hostage, mobilizes similar themes through the framework of mental illness, providing representations of mania, bipolar disorder, and oppression, and the ways in which these experiences are often networked into toxic support structures that ensnare and erase the needs of those with mental illness. Using theories and narratives of the nonhuman as a device for thinking through ways of untangling depression, and regaining control over narratives through imagery of infection, cohabitation, and transformation, this book thinks through ways that this erasure can be, if not undone, at least mediated.

Normally in between other activities. I often scribble lines on a receipt I dug out of my pocket using the wall of a random building as a surface if I’m walking somewhere. If I’m in a long meeting that I’m not invested in, I’m often writing a poem when I am pretending to take notes. I used to wish I was one of those people who could schedule set hours dedicated to writing during the day, but when I have tried this, I end up just staring at my computer screen or the page.

I think there is a lot of benefit in sitting down and just freewriting, and I often do this, but only in bursts. Anything longer than 15 minutes leaves me, as a writer, dry. I need to just wait for those moments to pop for me. Sometimes that means I write for 3 hours at midnight, and sometimes it means I am writing a few lines of poetry in the back matter of a book, very lightly in pencil, on my way to teach a class.

Adjacent Pineapple has a really cool, clean design, and an array of experimental poetry and book reviews. E-ratio is also a wonderful home for experimental work, as is Streetcake Magazine, Taggverk Journal, and Dusie. I also really enjoy experimental flash, and look to Pidgeonholes, Milk Candy Review, and X-Ray Literary Magazine for this type of work. 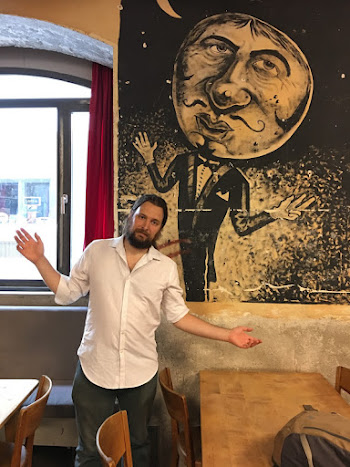 Erik Fuhrer is the author of 4 books of poetry, including every time you die (Alien Buddha Press), not human enough for the census (Vegetarian Alcoholic Press),  VOS (Yavanika Press), and At Root (Alien Buddha Press). His fifth book of poetry, in which I take myself hostage, is forthcoming later this year with Spuyten Duyvil Press. Erik's partner, Kimberly Androlowicz, a visual artist, is his steadfast collaborator and provided full-length images for not human enough for the census and in which I take myself hostage. His website is erik-fuhrer.com.

A selection of his poems appeared in the fourth issue.

Erik Fuhrer The art of writing