The art of writing #42 : Andrew Brenza

How did you first come to visual poetry? What is it about the form that resonates?

Besides the occasional encounter with a shaped poem or the work of ee cummings, I did not really become aware of visual poetry until I was in graduate school at Temple University's creative writing program. There, I first came across the visual works of Johanna Drucker, Leslie Scalapino, Susan Howe, bpNichol as well as the works of concrete poets like Ian Hamilton Finlay, Emmett Williams, Eugen Gomringer, etc.. Mary Ellen Solt's Flowers in Concrete remains one of my favorites. For me, visual poetry opened an entirely new world of meaning-making and image-making. It seemed to offer a means of expression that went beyond the semantic meaning of "regular" looking poetry. In fact, it added additional layers of meaning which allowed for an increased complexity of expression. It offers a way to represent the ineffable through objects and poetic experiences that can, I think, diminish the dominating and prescribing "I" of lyric poetry.

You’ve published poetry in numerous journals. Do you see your writing as a single, extended project, or a series of disconnected threads? Are you in the process yet of thinking about collecting any of your work into a manuscript?

Yes, I have published four books of poems, three of which are entirely composed of visual poetry. I also have two chapbooks of visual poetry slated for publication: Under a Digital Sky from Trainwreck Press, which I am particularly excited about, and Geometric Mantra from Above/Ground Press. My work very much tends toward the serial, so the chapbook and the book are important units of composition for me.

I have a family and a full-time job, so I try to steal an hour or so each morning to mess around. I try not to put too much pressure on the creative process, but have come to rely on this morning art ritual for what sometimes feels like a thin grip on sanity/humanity.

My go to journals are Utsanga, Brave NewWorld Magazine, X-Peri, Sonic Boom, Word For/Word & Otoliths (all online) as well as ToCall and IndefiniteSpace (both print).  For visual poetry, I think that the small press is perhaps the most important means of distribution. Because of this, the chapbooks, objects and books produced by presses such as Simulacrum Press, The Blasted Tree, Timglaset Editions and Viktlösheten Press are very important to me.

Right now, I am very into the work of Volodymyr Bilyk. Bilyk's Da Eel is my current favorite. 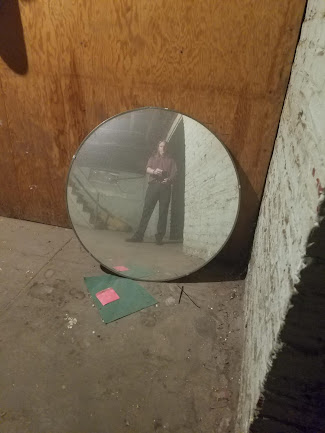 He had a selection of visual works appear in the fifth issue.

Andrew Brezna The art of writing