I was a teenager and avid library visitor. I would walk around aisles and pick out books that seemed interesting. I do not recall what anthology, but I think I found a book of poetry and it spurred me to write. Being a moody teenager, I was also influenced by song lyrics, especially in grunge music. At some point, I discovered a book called The End of Intelligent Writing by Richard Kostelanetz. In it, Kostelanetz celebrates experimental writing and trashes mainstream literature and the journals that publish it. That is when I embraced non-conventional writing. I started a writing method that involved arranging words I found in the dictionary, especially words no one regularly uses in conversation, into rhythmic patterns. There was a monthly poetry reading at a bookstore in a town nearby, and I would recite these word-combo poems to confused audiences. As years went by, I started collecting books about concrete poetry, experimental writing, and writing by outsiders. I was also steeped in the visual arts, and learned about Surrealist and Dadaist writers, like Tzara, Artaud, Lautreamont, etc. The work of the Language Poets also struck me. To me, there is actual poetry as a system with rules or conventions, and then there is poetry as the artistic or creative misuse of language, a play of meaning or structure that tries to undo the power that mundane rationalizations have over us. I vacillate between admiring both types of poetry, going from being awestruck and jealous of the breadth of knowledge of T.S. Eliot one day, and then the next day being mind blown by poems that eliminate words outright.

How does your visual work interact with your text?

Visuals often combine with my writings via a mix of different digital tools or apps. I have numerous pieces of writing that I cannot get published, no matter how many submissions I have sent out, probably because the writing is not very good! So, I have taken lines or bits and pieces and rearranged them in a word processor, using whatever functions I am familiar with (or stumbling upon new techniques) to sprinkle words around, or put them in shapes, etc. I am also fond of using ‘found’ images, which comes from me taking pictures of random things with my cell phone, which I usually further distort using apps on my phone. Oftentimes, the pictures are from images on the TV or what I found on my computer. The screen, background lights, shadows, and reflections all add unintended elements. On occasion, I have combined the two main methods, wherein I have embedded images in the word processor page, and then mixed lines of poetry around/behind/over the images. And then, to top it off, I have taken pictures with my cell phone of the word docs on the computer screen, to then further manipulate with phone apps. I work in a slapdash fashion most of the time, with no preconceived notion of what I am attempting to accomplish.

Writing and creating has been a stop/start process for me for a long time. I wrote and painted at a frenzied pace for years. Then I stopped for over a decade. I have miscellaneous notes, notepads, loose sheets of paper, and outside of the Word docs on my computer, most of it is in a filing cabinet. Sometimes I pull open a drawer, yank out a random piece of paper, sit down at my computer, and start writing based on what I find on the page. It is as if I am plagiarizing myself, or using my own old writing as found text. With the things I have on a computer already, I may open a few docs and copy/paste lines across them. Hardly ever do I write a poem or story from scratch anymore. It is all hodgepodge, copy/paste, collage, and sometimes I do just enough editing to make it seem coherent.

As I said, writing and creating has been a stop/start process for me. I started writing, painting, and making assemblages when I was a teenager. I slowed down and focused only on writing when I was in college. In my mid-twenties, I wrote up what I considered a manuscript, a 40 page long fragmented prose-poem. Then I lost my job, my place to live, and along with it much of my interest in the arts. After focusing on maintaining a steady job for over a decade, when my partner and I decided to have a baby, I began to write and create again, at a furious pace, until I had to go back to work after parental leave. Now, I have little time for creative endeavors, other than to spend the weekends or evenings sending out submissions to journals, based on the output of work I have amassed over the course of the stop/start decades. The exceptions have been with digitally based visual poetry, which I can partially work on from the comfort of the living room, messing around on my cell phone’s apps while keeping an eye on the toddler. Ink drawings have re-captured my interest lately, although I cannot draw and have little interest in acquiring actual skill.

Steel Incisors (not yet released, it is an anthology of dark vispo, in which I will have a couple of pieces)

Among those making visual poetry, I admire James Knight, who uses digital tools to create experimental and horror themed works. Richard Biddle’s work is so layered and abstract, it is surprising to see how there is poetry involved. Ava Hofmann is a master of word processors, making art that crisscrosses comics, digital collage, poetry, and political radicalism. Mike Corroa’s books are something else, a hybrid between design, posthumanism, and experimental literature. Rachel Lilim has nailed down a specific style, with digitally produced visual writing often cast in an otherworldly green glow.

Otherwise, writers I admire that focus on writing, sans visuals, would include: RG Vasicek, Evan Isoline, Elizabeth Aldrich, Logan Berry, and Daniel Beauregard. What they have in common, if this diverse group could be said to have anything in common, is the way the horizon of shared understanding is broken, gone, or being sucked away, as if their writings belonged in a different reality. That is, after all, all I have ever wanted: to be in a different reality, or see just enough of it to bring back a picture of it for everyone to glance at and then turn away. 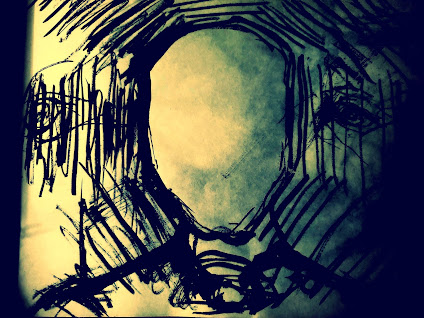 Selvey has a selection of visual pieces in the fifth issue.

T.W. Selvey The art of writing