The art of writing #52 : Eleonore Schönmaier

On the weekend I read to my partner a few lines from the notebook I kept when I was ten years old. He said, "That sounds like a poem." I grew up in a northern wilderness settlement where we had few books, and limited resources. I did have access to pencil and paper and with these tools I started to create a new world. Words and books seemed magical to me. When I entered elementary school I viewed a film about a library. With great excitement I described this to my father and together we went into town where I signed out books from the one room library. Authors were like gods: they were rumoured to exist but one had to have faith since they were not visible. Growing up I was surrounded by multiple languages including Ukrainian, Portuguese, Polish, German, Dutch, French, Italian, Cree and Ojibway among others. The sounds of these languages had huge resonances for me and many of us were multilingual. Listening to the sounds and nuances of words was important as people were often stranded between languages. I've essentially been writing poetry from the moment I learned how to form the sounds of words on the page. However it took a long time before I was able to enter the professional world of writing. Life in the north was about survival and my first career had to be practical: I worked in my twenties as a nurse. During those years I re-read my notebooks and discovered I had written over and over again "I want to write." I signed up for a university writing class and soon started to publish my work along with teaching creative writing.

I love how words in a poem can be condensed and yet carry so much meaning and music.

I usually write a poem in my mind before I place the words on paper. Along with reading, thinking, and playing the piano I also spend my life observing my surroundings. My old notebooks serve as valuable resources and I often merge a notebook entry with my memories in a combination that I call live-retrieved memory. When I'm out walking the images from past and present coalesce in my thoughts into the music of a new poem.

You’ve published multiple full-length poetry collections. Do you see your writing as a single, extended project, or a series of self-contained units?

I write each poem independent of other poems. However, for a new manuscript I choose poems that unspool together as a poem cycle. Each poem links to the next one by connecting to a subtle shared detail even though the poems may be different thematically or geographically or move back and forth between past and present. In forming these cycles I'm trying to recreate how memory works. When I converse in a cohesive original conversation with a friend both of us have parts of our minds active with memories along with observing each other and our surroundings. I try to create a collection that mirrors this complex conversational process because our lives are multifaceted and I don't want to simplify this inherent layering. Our lives are polyphonic and I want poetry to also be polyphonic. Jean van Loon in her Arc Poetry review of Wavelengths of Your Song describes this process astutely: "The fluidity within the poems is matched by the subtle flow between them. One slips into the next through images: forest, snow, cello music, wind, the sea, horses, chocolate. The effect is like that of a symphony with interwoven and subtly varied musical statements, and, as in a symphony, the effect is cumulative. The recurring images—not “repeating” because in each case the treatment and context is different—become like a memory shared with the poet."

In the same way that I write poems initially independent of each other I also create new collections independent of previous books while at the same time keeping in focus an overview of the whole body of work. I did recently have the thought that Wavelengths of Your Song (2013), Dust Blown Side of the Journey (2017) and Field Guide to the Lost Flower of Crete (2021) form a sort of trilogy but this will actually only be true if my following collection creates a radical departure.

Years ago I forced myself to sit in my office for a minimum of three hours even if I spent time staring at the wall. I never do this now. I wrote a lot back then but I write more now when I let my days evolve intuitively. I fit the writing work into my days whenever possible with all the rest of life happening around me.

I subscribe to multiple lit mags and read numerous online journals and in listing these I would leave others out that are equally valuable that I wish I had time to read. I enjoy reading talking about strawberries all of the time.

I re-read Vikram Seth's An Equal Music this week. Sadiqa de Meijer's The Outer Wards and alfabet/alphabet and Danez Smith's Homie have been important to me during the past few months. In German I've been re-reading Paul Celan, and in Dutch Gerrit Kouwenaar. The translations of Cavafy by Evan Jones have held my attention. I have a stack of books I've started to read by the philosophers Martha Nussbaum, Susan Neiman, and Iris Murdoch, and the physicist Paul Halpern. Jan Swafford is both a composer and writer and his biographies are superb; I'm looking forward to reading Mozart: the Reign of Love. 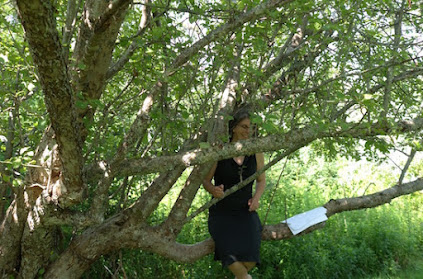 Eleonore Schönmaier’s new collection Field Guide to the Lost Flower of Crete is forthcoming in June 2021 from McGill-Queen's University Press. Wavelengths of Your Song (MQUP, 2013) was published in German translation as Wellenlängen deines Liedes in 2020 by parasitenpresse (Cologne).  Schönmaier is also the author of the critically acclaimed Dust Blown Side of the Journey (MQUP, 2017) and Treading Fast Rivers (MQUP, 1999). Dust Blown Side of the Journey was a finalist for the Eyelands Book Awards 2020 (Greece). She has won the Alfred G. Bailey Prize, the Earle Birney Prize, the Sheldon Currie Fiction Prize and the 2019 National Broadsheet Contest among others. Her poetry has been included in the League of Canadian Poets and the Academy of American Poets Poem in Your Pocket Day Brochure, and has been widely anthologized including in Best Canadian Poetry.  Born and raised in a remote settlement in the northern Canadian wilderness she now divides her time between Atlantic Canada and coastal Europe.  https://eleonoreschonmaier.com

A selection of her poems appear in the sixth issue.

Eleonore Schönmaier The art of writing