The way Mo survived everything, we thought he’d live forever. Weak stomach, bad allergies, bleeding intestines, bum heart – he had his first hematoma at four, and the vet said he’d rarely seen them in a dog so young; by the time he had his sixth, at thirteen, the procedure was so familiar as to be automatic. 8 a.m. drop off, out of anaesthetic at 2, instructions given, drains and sutures, his once-soft ears thick and hard with scar tissue.

He kept going, kept slowing. Twelve became thirteen, fourteen, fifteen. His hearing went first, then his balance: a tendency to skid out while running, his back legs tight and stiff. Eyes cloudy. Weak bladder. The last year, as I worked out of my basement during the pandemic, he tentatively followed me downstairs, falling asleep under a blanket in the corner of our quiet room. Every two hours I took him outside. After he finished, I helped him back up the steps, reminding myself when to let him out again.

His last two days he changed so quickly. Lost control of his back end, ran around in circles, barked excitedly as he tore around the house. The day before he died we went for a walk through the tall grass trails, and for a moment he turned to stare at me, as if trying to fix something in his mind. The next evening, he had his first seizure, then another; two hours later he hadn’t stopped, the time between each measured in minutes. When we drove him to the vet I held him still, stroking his fur as he jerked and clacked his teeth. And just before midnight, a needle filled with pale blue liquid found the vein, his eyes open and staring, his shaking stopped forever.

In Dragon Warrior IV, the third chapter is my favourite. Every day you wake up and kiss your wife; you can go to work or not, and if you borrow the neighbour’s dog, you can explore the world together. North past the forests and into the caves, or south down to Bonmalmo and Endor. But there’s a village south-east of Lakanaba full of strange smells, glamour and mist. Go alone and you find a place of trickery. Fox-formed. You buy a bright new sword and stay the night; by morning that shining blade has turned to wood.

After Mo died I spent the first few days numb, then hard in grief. Loading up my savefile, I passed by Old Tom, found his son, borrowed the dog. In this world the days and nights never end: just bits and flags in code, they control colour and behaviours, but not age. The dog and I spend each day outside of time, and no matter what happens, we can always start again. Day after day he follows me into the hills as we leave Lakanaba, following the same well-worn path south-east. We enter a place I know in the woods, a village of foxes, full of strange smells, glamour and mist. The dog barks and looks at me. He stares to fix this moment in his mind. We run in, dispel the trickery and deceit. We chase the foxes out beyond the town. 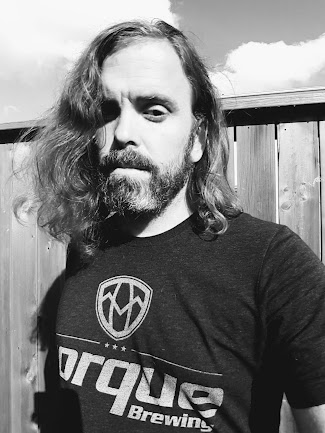 Julian Day lives in Winnipeg, where he works as a software developer. His work has most recently appeared in Barrelhouse, periodicities, and Banshee, and his debut chapbook is Late Summer Flowers (Anstruther Press, 2021).
flash fiction Julian Day