I hate it when people keep their dust in coat pockets

I am eating spinach pie

& you are also eating

by balloon      over the night

thank you for waiting for me

looking down into the dark staircase & reaching for the light switch

a woman’s voice from below

why do you want to do that? 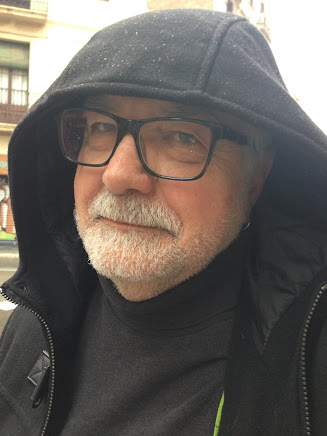 Edward Smallfield is the author of The Pleasures of C, One Hundred Famous Views of Edo (a book-length collaboration with Doug MacPherson), equinox, americana, and, most recently, to whom it may concern. He is also the author of several collaborative chapbooks, locate (with Miriam Pirone) and lirio and anonymous (both with Valerie Coulton). His poems have appeared in Barcelona INK, bird dog, Denver Quarterly, e-poema.eu, Five Fingers Review, New American Writing, Páginas Rojas, Parthenon West Review, 26, Wicked Alice, and many other magazines and websites. He has participated in poetry conferences in Delphi, Paou, Paros, and Sofia, and lives in Barcelona with his wife, the poet Valerie Coulton.
Edward Smallfield poems